Home Reply Reply To: Time to ramp it up for a new year. – Part I 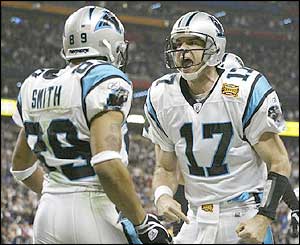 Though he would make a mistake here and there, he could at least keep us in a game and rarely had outings like he ended last season and began this one. Not that he was ever mistaken for Joe Cool before but he’s just been okay to friggin awful since his elbow got ruined. He can’t throw a deep ball anymore… at all. Last season we got 3 wins on late game Jake heroics.. but looking back game 1 was Jake, the other 2 games were more Steve Smith making sick catches.

Unless our oc is sabotaging the season so he can get a new gig or a new boss, I don’t understand what they were trying to accomplish yesterday. Or since camp opened for that matter. This team has looked like stomped shrimp and chitterlings on offense for a while.

Don’t get me wrong, 1/2 or better of the turnovers in the last 2 games are on Jake. I do gotta say that it’s kinda dumb to keep him under center and taking 5 step drops (and no help in the backfield) when the oline is obviously having a hard time picking up the blitz.