Hidden in the Narlynwik Forest is the Temple in the Meadow.  A race of intelligent spiders are Hel bent on raising this temple.  For thousands of years they have built and waited.  They can control the minds of some dim minded creatures like the ogres they garner for labor.  Once per 5 millennia the planets align and the collectors fill with the power to raise the temple back to the surface.

Not long ago, the temple was defeated by the Heroes of Foothold and sent under once more.  But the spiders weren’t finished.  They settled for a partial victory and managed to prevent the entire temple from collapsing.  Power courses through the temple and slowly they persist.  Spiders are very patient after all. 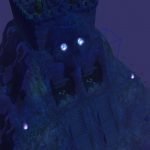 Looking down on the Raised Temple from our PnP campaign.